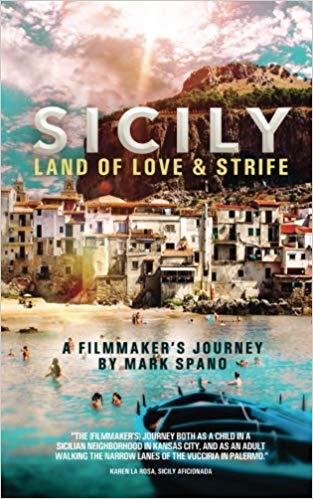 What most people know about Sicily they learned from movies about organized crime—movies that are based on a mythic past that little resembles the Sicily that filmmaker and author Mark Spano describes in his Sicily: Land of Love and Strife, the book that is the companion to the documentary of the same name. The book, unlike the documentary, is also a journey of the self, exploring the Sicily of Spano’s parents as well as his neighbors in his Sicilian/Italian community of Kansas City, Missouri. He’s looking for the Sicily of his family’s memory, the one he heard in stories growing up. The Sicily he visits is a very different one from what he’s heard about and what he’s seen in movies. The Sicily he encounters is one that awes him, mesmerizes him, and draws him in like a siren’s song. He writes, “This is not everyone’s story of Sicily. It is mine. It is a record of where my reading and travels have taken me.”  READ MORE