Filmmaker Mark Spano is pleased to announce that his feature-length documentary, “Sicily: Land of Love and Strife,” is returning to historic North Park Theatre in Buffalo, New York, where it was originally screened for one-night-only before a capacity crowd back in June.

The return to Buffalo marks the film’s first theatrical run, which will include two shows each day from Friday, September 7, through Thursday, September 13.

The Italian Cultural Center of Buffalo (ICCB), the Federation of Italian-American Societies of Western New York (FASWNY), and the Per Niente Club of Buffalo co-sponsored the June show.

Mark Spano, the son of Sicilian immigrants, spent five years traveling between his home in Chapel Hill, North Carolina, and Sicily with one goal in mind: to try to change the way most people think about his family’s homeland.

“But for crime, Sicily has gone unexplored,” says Spano, who holds dual citizenship in the U.S. and Sicily. “Little has been produced about its cultural or historical relevance yet fewer places on the planet compare to Sicily as a place of wonder and intrigue. The island’s association with the Mafia, so deeply entrenched in popular consciousness, has obscured more rounded and accurate depictions of its history and culture.”

Until now. “Sicily: Land of Love and Strife” reveals a place and people far removed from the Mafiosos — a destination of “spectacular beauty, epic human struggle, diversity of culture and philosophy, and invaluable historic sites,” Spano offers, “as fundamental to western ideas and civilizations as Egypt, Greece, or Rome.” 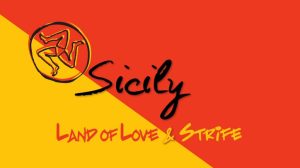 Along with panoramic explorations of Sicily’s natural beauty and lingering gazes at its fascinating inhabitants, the 98-minute film includes interviews with international scholars and authorities who introduce diverse perspectives on the history, culture, and norms of Sicilian life unknown to the general public.

“Sicily: Land of Love and Strife” will be screened on the following days and times:

North Park Theatre is located at 1428 Hertel Avenue, Buffalo, NY 14216 (716.836.7411). Tickets are $10.50 (senior citizens’ discounts available) and can be purchased in advance on the website www.northparktheatre.org or at the box office before the shows.

For more information on “Sicily: Land of Love and Strife,” go to www.markspano.wordpress.com. The film is also on Facebook.

Born and raised in an Italian-American neighborhood in Kanas City, Missouri, Mark Spano is a prolific writer, filmmaker, and television producer. His critically acclaimed murder mystery Midland Club was published in 2016. Sicily: Land of Love and Strife – A Filmmaker’s Journey, the companion book to his film, will be available in December on Amazon. For more information: markspano.wordpress.com.